It ain’t over till the fat lady sings, or so the saying goes. But is it over at Lola, the beleaguered Soho restaurant, without the fat lady — or any person of any size or gender, for that matter — ever having crooned a tune?

The board meeting took place in Albany, with a teleconference link to the S.L.A.’s New York City office in Harlem on 125th St. and Lenox Ave.

Appearing in person before the board in Albany was attorney Terry Flynn, representing Lola, which is located on Watts St. In opposition were attorney Barry Mallin representing the Soho Alliance and John Evans, a resident of 362 West Broadway and a member of the Soho Alliance. Also speaking from New York City via teleconference was Gayle Patrick-Odeen, a co-owner of Lola.

It was the third hearing on Lola’s live music request; at previous hearings on Feb. 20 and March 5 the S.L.A. postponed making a decision.

S.L.A. Commissioner Noreen Healey said the board had reviewed the transcript of Lola’s 500-foot-rule hearing that was held in 2004 and found no clear evidence that Flynn had acted to amend the original application document, which indicated background music only. Healey acknowledged that Mallin and Soho Alliance Director Sean Sweeney had spoken against live music at the hearing, but said that Flynn’s actions were “ambiguous.” Flynn claimed in previous hearings that he had “verbally” amended the application at the 500-foot-rule hearing.

The S.L.A.’s vote was without prejudice, meaning the matter can be brought up before the S.L.A. board yet again. Healey also suggested that Lola could return to Community Board 2 to discuss the issue further.

In a press release by the Soho Alliance, Sweeney said, “This decision by the S.L.A. is a major victory for beleaguered neighborhoods beset by an oversaturation of late-night, licensed premises. … Despite unanimous opposition from Community Board 2 and every elected official in the district, the ‘old, corrupt’ S.L.A. granted the license. … The ‘new’ S.L.A. observes the 500-foot rule.”

Patrick-Odeen was as disappointed as Sweeney was ebullient. In a phone interview, she said, “It was as though they didn’t want to hear from me. I had the resolution in my hand,” referring to a C.B. 2 Business Committee resolution from 2004 that endorsed live music at Lola. Healey had said in justifying her decision that the application specifying background music was the only thing the community board had considered.

Given the long-standing animosity between Lola’s owners and some members of C.B. 2 — Sweeney is a member of the community board — Patrick-Odeen said she felt that returning to C.B. 2 would be “a fool’s errand.” In a phone interview, Lola attorney Flynn said his clients were weighing their legal options, which include returning to the S.L.A. with more evidence or filing an Article 78 petition in New York State Supreme Court.

There is currently an Article 78 petition before State Supreme Court seeking to annul Lola’s current liquor license. In that case, Lola attorney Eric Sherman has filed a motion including affidavits from four named petitioners — among them Ethan and Ivan Karp of OK Harris Gallery — who allege they never gave the Soho Alliance permission to use their names in legal proceedings against Lola. The Karps’ names were included on a Soho Alliance petition against the restaurant, but they say they approve of Lola. Judge Marilyn Shafer, who annulled Lola’s first liquor license in 2005, has set an April 3 return date on Sherman’s motion.

Was This Street Made for Walking? 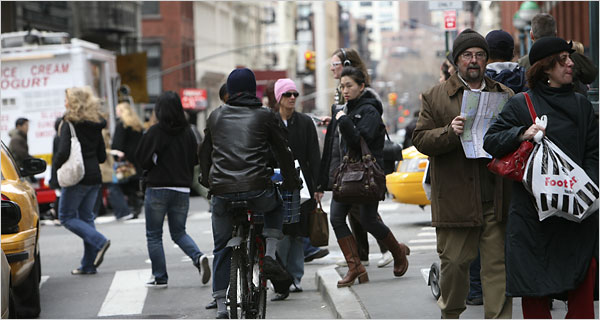 “I would argue that SoHo today is a mall,” a local resident says.

ON a weekend stroll down Prince Street in SoHo, past the vendors with foldout tables heaped with jewelry and movie scripts, the crowds flocking in and out of the Apple store, and the milling clusters of overtired out-of-towners, it might seem hard to imagine that the neighborhood could suffer from more foot-traffic congestion than it already does.

But that peril, along with the daunting prospect of still more tourists, is the main reason many local residents oppose a plan suggested this month by the city’s Department of Transportation to declare summer Sundays on Prince Street car-free from 10 a.m. to 6 p.m.

The plan drew heated opposition from about 200 people at a meeting on March 11 of the Traffic and Transportation Committee of Community Board 2.

On Thursday night, the full board voted to reject the idea, asking the department to explore car-free zones in a different form or perhaps on a different street.

The argument in favor of the plan, said Ian Dutton, a community board member who is a pilot and says he has seen pedestrian-only streets work well in Europe, is that the vast majority of traffic on Prince Street is foot traffic, yet nearly all the street space is given over to cars.

Opponents of the plan, among them Sean Sweeney, executive director of the SoHo Alliance, say that creating more space for pedestrians would make the area even more of a destination for tourists, attracting more visitors and vendors, which would force existing traffic onto adjacent streets and destroy any last remnants of the neighborhood’s residential character.

“The first week, if you had no cars you’d have some room maybe,” Mr. Sweeney said. “But after a couple of weeks or a couple of months, the word would go out in all the tourist guides: ‘Oh, the Prince Street mall!’ ”

That damage, Mr. Dutton maintains, has already been done. “I would argue that SoHo today is a mall,” he said. “It’s just a mall with New Jersey S.U.V.’s driving through it.”

Both supporters and opponents of the plan blame the street vendors, and what they say is a lack of police attention to illegal vending, for aggravating the congestion and taking up valuable sidewalk space in a neighborhood where little of it exists.

Brad Hoylman, chairman of the community board, said that even after Thursday’s vote, the idea of a pedestrianized Prince Street may not be dead, if the transportation department can, among other things, address the problem of illegal vendors and agree that any experiment with banning cars from a local street would be temporary.

Mr. Dutton did not want to give up. “I tried to ask this over and over: ‘Do you like Prince Street the way it is?’ ” he said. “Almost no one can say that. So, what are we going to do about it?”

A street fight has erupted in SoHo.

Prince Street residents and merchants are up in arms over a proposal to ban cars from a six-block stretch this summer to make way for Sunday strollers.

The city plans to begin the 14-week pilot program on Prince, from Lafayette Street to West Broadway, on Memorial Day weekend. The section would be off-limits to vehicles on Sundays between 10 a.m. and 6 p.m.

But residents claim the move would attract more street vendors, block access to emergency vehicles, and even spark fights between bicyclists and pedestrians.

“Mulberry Street is your future if you let this pass,” Lillian Tozzi, of the Little Italy Neighbors Association, said at a Community Board 2 meeting last week attended by 200 residents. “You will lose your right to enter freely into your apartment, to have visitors.”

Andy Wiley-Schwartz, the city Department of Transportation’s assistant commissioner of strategic planning and sustainability, said the project would not increase the number of vendors or turn the area into a carnival.

“This is not San Gennaro,” he said. “There’s no funnel cakes.”