– Public Artwork Saved
Public art and SoHo’s cultural heritage received a shot in the arm last week from the Landmarks Preservation Commission, when it rejected a request to remove artist Bill Tarr’s steel sculptural door from in front of 102 Greene Street.  The building’s owner sought to replace the sculpture with a display window for a new boutique. The door has been in place for over 45 years, even prior to SoHo’s Landmarks designation in 1973
Bill Tarr was a pioneering SoHo artist and owned the building at the time of the sculpture’s installation. His works include the Martin Luther King Memorial at 122 Amsterdam Avenue near Lincoln Center, as well as the bronze casting “Gates of Hell” at the Holocaust Memorial Museum in Washington, DC.  His sculptures have been displayed at the Whitney Museum and the Art Institute of Chicago.
Saving this site-specific work preserves a portion of the historic fabric reflective of the development of the SoHo Cast-Iron Historic District, its cultural past, and is a prominent artifact of SoHo’s artistic streetscape.
The SoHo Alliance submitted testimony in support of preserving the artwork and the Landmarks chair noted that publicly.  The preservation effort was spearheaded by the Broadway Residents Coalition. 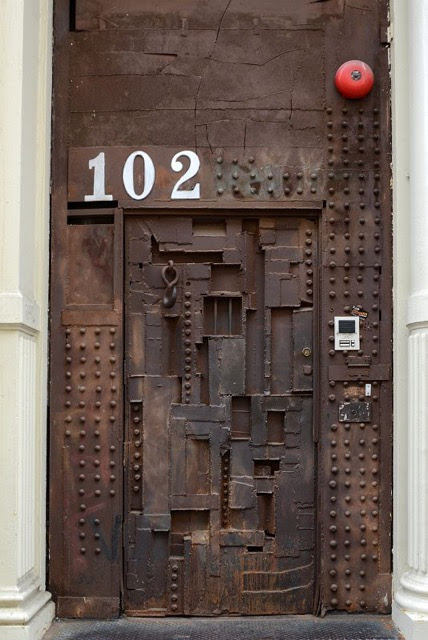 – Lower Greene / Upper Mercer Closures Announced
To accommodate a large crane needed in the ongoing construction at 11 Greene Street, Greene Street between Canal and Grand will be intermittently closed to vehicular traffic during the day for a month starting Saturday, January 27 through February 26, seven days a week. Alternative routes include West Broadway or Sixth Avenue.
Mercer Street between Houston and Prince Streets will also be closed during the day to vehicular traffic on February 3 and 4, with rain dates of February 10 and 11.  This also is to accommodate a crane used in the construction of 151 Mercer Street.
Any questions regarding these street closures should be addressed to the permit expediter, whose contact information is shown on the Closure Notifications attached at the bottom of this email.
Regards,
Sean Sweeney
Director
SoHo Alliance
212-353-8466
info@sohoalliance.org
PO Box 429
New York, NY 10012
2 Attachments:
2017-588 Full Greene St. Closure Notification for 1-27 thru 2-26-18
2018-024 Full Closure Notification